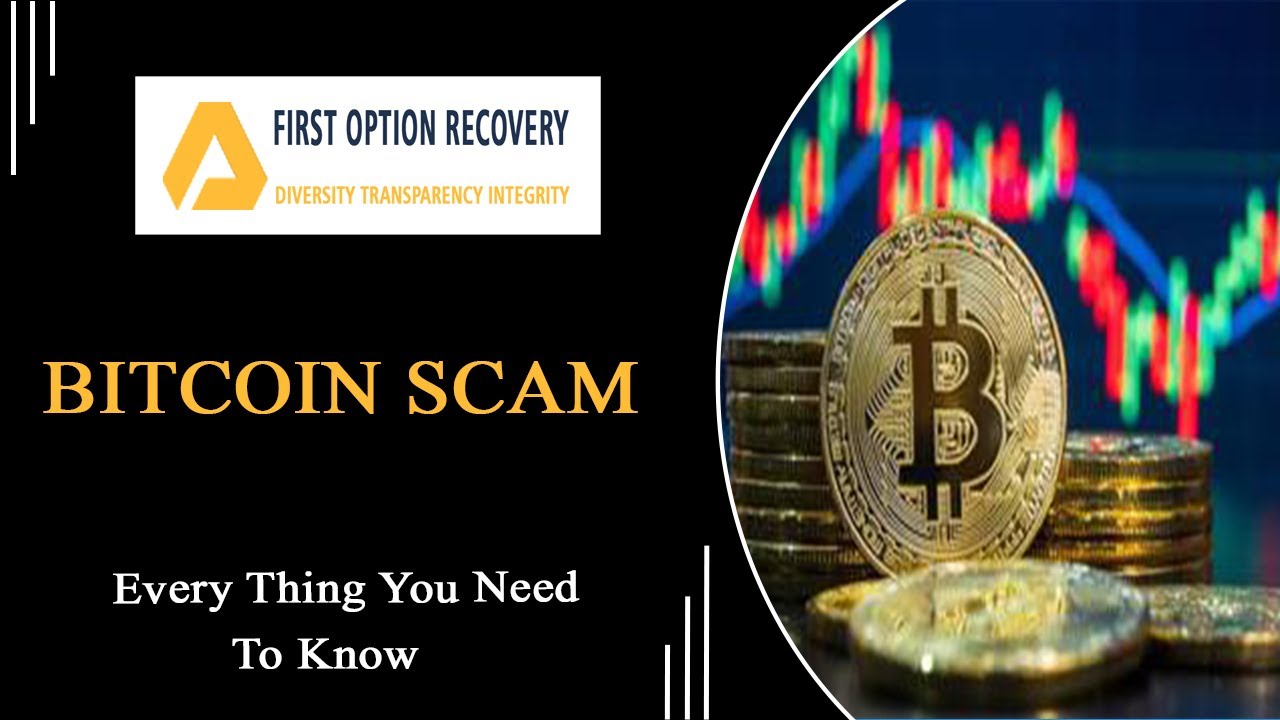 Bitcoin, being the forefront in the cryptocurrency market, has been in the news for quite some time now for both its positives and pitfalls. First Option Recovery, a firm dealing with crypto scams (primarily Bitcoin scams), has been in the business for over a decade with more than 3000+ cases handled and over $19 million recovered. The firm, headquartered in Albany, New York is at its forefront handling all the complex financial cases with ease and professionalism and with a 90% above success rate. Our unique methodology of dealing with crypto frauds (primarily bitcoin scams), forex frauds and even chargeback frauds have made us the numero uno choice among all fund recovery programs across the globe.

There is an age-old debate as to whether bitcoin is scam or legit. A form of decentralized currency, without a proper administrator and no government regulations backing it, BTC was developed by Satoshi Nakamoto in 2009 who has remained anonymous till date. The term, when fragmented, makes two words Bit and Coin meaning Shorter Coin.

Transactions take place after being recorded in the blockchain mechanism, these have a set of network nodes that need to be verified to form the required blockchain. The transactions are encrypted and no third authority can know how much money was transacted, the prime reason why this currency is used for illicit activities and has been the forefront in the race of the bitcoin scam that exist.

Initially started with a base value of $1, today 1 BTC is approximately worth $7000. Price fluctuations being normal, it once reached a high of $16,000 in the wee hours of 2017. While First Option Recovery already predicted its upsurge way before, all thanks to its amazing team of advisors, we are constantly keeping in touch with the price fluctuations as well on a daily basis.

Storing Bitcoin is no longer an issue, with various e-wallets coming up nowadays. The e-wallet is encrypted with a password and one can easily store as much money as he wants. The other option is Hardware wallets, although their storage is limited.

The most famous among the lot where a scammer creates a new website and starts promising insane returns on the amount of money invested. In order to make the website look more genuine, they hire an expert team of developers to replicate a genuine website with perfection.

A lot of major exchange websites have been spoofed, IQ Option included. In order to accentuate the process, these scammers produce a fake license number that is unverified in nature. Little does one check whether the number is fake or genuine by verifying it with the regulatory authorities.

In order to save oneself from these bitcoin scams, it is advisable to verify the license number of the exchange with the financial regulatory body of the specific country where all the license numbers of such exchanges are publicly available. And yes, First Option Recovery has already done the above stuff for you, where their portfolio boasts of all the validated and non-validated firms that are associated with bitcoins and other stuff.

If you send us a consultation request, you will see that when we reply back, the mail is sent from the sender with a domain name @firstoptionrecovery.com. A majority of the investors don’t know about it and click on the bitcoin scam’s email sent from other domain addresses. These types of crypto frauds are known as Phishing scams. Here you will be sent an email so as to offering you an exceptional return or bonus based on your investment sum. The email would contain a link of a website, clicking which would redirect you to a site that would look exactly like the original website.

You will end up providing all your info into the website and they will steal your info and credit card details as well. In order to save oneself, it is advisable to always check the URL of a website before entering your details into it.

Initial Coin Offerings are what IPO’s would be for cryptocurrencies. However, ICO’s don’t have to go through the same rigorous complicated process that an IPO needs to go with. All the regulations, paperwork are exempted when an ICO is done, which paves the way for scammers to easily fool the investors. In order to save oneself from the scam, it is always advised to check the white paper before investing in an ICO. A white paper is an official document that needs to be issued by the new blockchain projects before their ICO, informing the reader about the new technology or product that is being launched. First Option Recovery highly suggests you to hire a financial expert so as to look into the matter in a better way.

Being a part of the phishing, social media scams are not new in the hood. Rarely does a person know that social media websites use cookies so as to provide information relevant to a particular person? In other words, if you browse through Google about bitcoin, and open Facebook soon after that, you would realize that you will be shown ads related to Bitcoin exchanges and returns. Although some being genuine, most of them are not, where, being a naive investor, you are being duped into clicking that link and ending up into a fake website that looks like a genuine one. Adding all your important info just adds up being the final nail in the coffin.

Recently there has been a new type of bitcoin scam that’s happening on social media and so the investigators from First Option Recovery decided to investigate the mishappenings. We came to know that these new types of scams are called giveaway scams. Giveaway scams are relatively new in the crypto market but have been quite successful in ripping an investor off. What these scammers do is create fake profiles of famous celebrities, gain a substantial following and then eventually start running a fake giveaway of a large number of BTC’s.

The innocent fans of these celebrities, having trust in them, end up participating in the giveaway but there lies a catch. In order to participate in it, one needs to make a small deposit in BTC’s itself.

Avarice, being the trait of most human beings, and having too much trust in these celebrities, they end up making the investment without knowing that they are going to get scammed. The scammer after making thousands of dollars from each giveaway runs away with the money.

When Facebook and Twitter started tracking these and eventually suspending those accounts, the scams ended up on Youtube where hackers started hacking channels with substantial followings and renamed it under a recognizable brand name. Then they started putting morphed videos of celebrities asking their fans to participate in the bitcoin giveaways. The blue tick verified brand names were enough to make their fans participate in the giveaways.

What to do when you lose your money?

Bitcoins have been in the news for over a decade and so are the scams surrounding it. Whenever a person ends up losing his money, he ends up sad, dejected and in despair. Rarely does he know that there is always a way out to recover your money and the best amongst them is to take the help of a good fund recovery firm instead of report the bitcoin scam to the FBI authorities.

First Option Recovery, being pioneers in fund recovery for over a decade has been successfully able to recover funds from all types of scams that are happening in the world. Be it cryptocurrency scams, binary options scams or any kind of investment scams, our team of expert attorneys and bankers across the globe have successfully recovered over 19 million dollars as of now. Do send us a consultation mail with your query and we will get back to you at the earliest.

Just a step away to get your money back

Fill Up the Form Right Now With All the Details. Our Representative Will Contact You at the Earliest With a Full-Proof Recovery Plan.